What if someone told you that you don’t need to care about terminology in your organization? That managing terms is an unnecessary extravagance? If you’re thinking “Hmm, there’s something in that!”, well, think twice. Terminology is a core translation quality category which, in turn, includes a bunch of subcategories of its own. You can take a look here. Providing a translation without terminology management is not far from playing a lottery game: maybe the translator (and the editor, afterwards) did care about terminology and its compliance/consistency or maybe they didn’t. Anyway, if you think that taking a chance in this situation is not a very good idea, then you might wonder what actually terminology management is and how you can implement it in your workflow.

OK, let’s take a quick look at the definition of the term terminology management; and first of all, of course, in the translation standards. The European standard, EN 15038 (2006) does not mention it, but lists Terminology work as an added value service. The first mention (w/o a definition though) of Terminology management can be found in ISO 17100 (2015) and once again in the list of value added services, while Terminology management systems are listed among Translation technology tools. In the American counterpart of these standards, F 2575-06 (2006), one cannot find the description either, but this time one can clearly see the entity depicted on one the figures (see below). 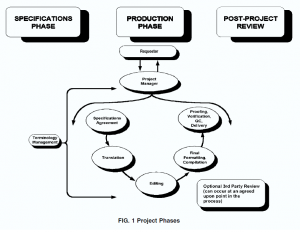 Terminology management is shown one-dimensionally inasmuch as this step may be integrated into other steps for shorter projects without jeopardizing the final quality of the translation. However, it should apply throughout the entire project to ensure terminological consistency.

Although the standards do not clearly state what terminology management is, it is not hard to figure out that it is a process involving the following:

It’s worth mentioning that this process is somewhat cyclical as terms come and go: some emerge, some become obsolete.

At this point one might wonder: how do I achieve this? Are there any tools available? Of course, there are! The most primal ‘tool’ is a 2-column source-target term spreadsheet (actually there might be and usually are more than 2 columns), that is very common among small players and those who decided to cut financial corners for terminology expenditure. Such a spreadsheet, of course, cannot be considered a tool on its own and is usually passed on as a report exported from (or sometimes to be imported to) a termbase.

The second most popular tool is SDL Multiterm. Although many find it, let’s say, not very convenient and user-friendly. Still, the majority of the exported termbases exist in the easy-recognizable cluttered Multiterm XML format.

Then, each of the available translation management systems (TMS), such as GlobalSight, WorldServer, Logoport, etc. usually feature a built-in termbase that is integrated into a TM.

And the last but not the least are proprietary products such as MS terminology portal (top of the iceberg of TRES), or for example Autodesk’s NexLT, etc.

We at ITI considered all of the above options and eventually found all of them not 100% suitable for our needs as a TSP that is working with a number of MLVs around the world. The main problem we experienced was the vast number of bilingual file formats (as each MLV favors its own format) which made it quite problematic if we were to facilitate only one of the tools.

Hence, we decided to build our own tool, just like MS and Autodesk. Over time we have designed a tool called MultiQA. In a nutshell, it was a web-based terminology management system which helped to keep glossaries neat and up-to-date (not to mention the robust availability for the team members), and our translations – term-consistent and error-free. As it was tailored to our needs, the productivity peaked drastically after its deployment. We had (and still have) far less quality issues and were able to organize a transparent and team-friendly collaborative workflow. However, here is why that was possible:

This terminology management solution is now available as one of the integrations in ContentQuo’s localization quality management platform.

If you want to find out more about term life cycle and a healthy approach to terminology management, feel free to check our slides on slideshare.

So what if someone told you that you don’t need to care about terminology in your organization?